Geoff Huegill and his wife Sara Hills have been charged over party drugs. Police discovered a substance alleged to be cocaine. The couple will appear in court on May as revealed by the The Daily Telegraph online.

Huegill, the former Australian swimming star and his wife were found locked up in a disabled toilet in the corporate area of Randwick Racecourse before getting charged with drug possession on Saturday. 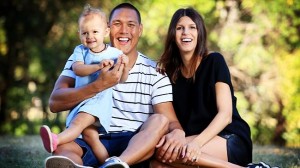 CCTV footage has been discovered by the police who were at the level four of the grandstand found the couple venturing into a disabled toilet in the vicinity of the Moet Lounge.

Police found the door locked, with the couple, prior to gaining entry. The Australian Turf Club’s private security was alerted after the couple showed behavior at the race track. The couple were taken into custody around 5:45 in the afternoon.

The pair were caught by the police carrying a few quantity of white powder, believed to be cocaine.

The couple has been charged with one count of Possess Prohibited Drug and will appear in Waverley Local Court on May 14th. They were escorted from the Moet & Chandon lounge by police officers while the personnel where the arrest happened refused to disclose a comment about the incident.