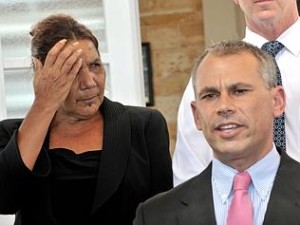 Alison Anderson has been suspended outside of Parliament House. Northern Territory Chief Minister Adam Giles says “If Clive wants Alison Anderson, go for it.” He says Clive Palmer is welcome to Alison Anderson, the rebel indigenous politician who left the Country Liberals and took two indigenous colleagues with her last month.

“I’ve got to say I’m amazed, surprise, bewildered he’s gone down this path.” Mr. Giles added. He was referring to Ms. Anderson’s detonative record in Northern Territory politics, having been behind attempts to sabotage four chief ministers and having been an active member for Labor, the Country Liberals, as an independent and now PUP.

Alison Anderson, Larisa Lee and Francis Xavier Kurrupuwu have resigned the Country Liberals. Mr. Palmer said that Ms. Anderson would become the first indigenous person to head an Australian parliamentary party. However, Mr. Giles already took that position, who clutched power in the Territory a year ago.

Mr. Giles also commented that Ms. Alison made the Northern Territory a “laughing stock” and that she’s trying to make them all alike.

Meanwhile, Ms. Lee has been charged with aggravated assault over an incident in her hometown of Katherine last week. Her political future is now uncertain and has made no comment about the move to PUP.

Adam Giles has been called a “liar” by Clive Palmer but did not specify what he had lied about. Mr. Kurrupuwu, from the Tiwi Islands, has remained mum since joining Ms. Anderson’s seceding group. Mr. Giles recruited Mr. Kurrupuwu to the Country Liberals and had been unable to get a hold of the latter.

Mr. Giles would like to know where did the “slush funds” went that Mr. Palmer claimed. He said that these are very serious allegations that he will seek legal advice about them. Mr. Palmer hinted that few will follow the trio to PUP eventually, but Mr. Giles denied the claim.

Mr. Palmer was being suspected that he had made promises to the rebels  he cleared that he had not offered any financial inducements for the trio to join his party. 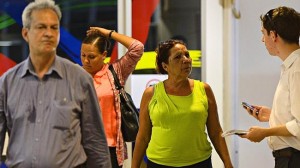 Ms. Anderson, who was originally a Labor politician will now become PUP’s NT leader. She said that it is an absolute fantastic time in the Territory’s political history that they have a third alternative choice. “It gives us comfort, stability, it gives us a home” she added.

After she have decided to join the PUP prior to serving as a minister in Labor and CLP governments, Prime Minister Tony Abbott’s chief indigenous affairs adviser Warren Mundine said: “You’ve got to ask questions about Ms. Anderson’s credibility.”