Couple Got Struck And Killed By A Freight Train 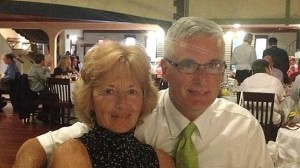 Earl and Mary Myatt had been married for 42 years. Moments before the couple bid goodbye by getting struck and killed by a train, Earl apologized to his son through a phone call.

Just a couple of minutes prior to the suicide bid, Earl called his son Bradford to say “he was sorry for what he was about to do.”

The couple was hit by a freight train at 1:37 PM local time near Utica, upstate New York, on Sunday.

He called his son at 1:35 PM and a couple of minutes later, they were dead. Bradford, 30, told the Utica Observer-Dispatch that they are devastated and he wants everyone to know that Earl was a good man and his mother was an angel who would do anything for anybody.

Mary Myatt, 59, had recently been diagnosed with a brain aneurysm that reduced its function equivalent to a toddler.

Bradford said that his father, Earl, was saddened and had a tough time accepting what Mary had been reduced to. “He missed his wife”, he added.

The couple’s car was found at the scene with a suicide note inside.