Bloody Mary – Best Drink To Order During A Flight

If you travel and would order a Tomato Juice or Bloody Mary on a plane more often than elsewhere,there could be something in it that is bizarre that urges you to get one.

Science is the secret ingredient of your in-flight favorite drink. Previous studies have proven that loud noises, such as an engine of an airplane reduces your ability to appreciate the flavorful taste of a drink by up to 30 percent. 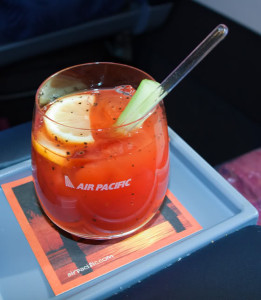 A Bloody Mary could be one of the few drinks that tastes the same regardless if you are flying. Umami has been linked to this effect.

The tastes of sweet, salty, bitter and sour are familiar, but there is a fifth taste that we can perceive with our tongue and it’s called, Umami. Its taste has been described as rounded, rich and savory.

Charles Spence and his fellow authors suggest that it’s all about the fifth taste for the tomato-based drinks to be sought-after during a flight.

Tomatoes are rich in umami and so as Parmesan Cheese and mushrooms. These can be served as umami-rich menu during a flight. Why not?

But don’t forsake water for bloody Mary marathons just yet. The authors say more work is required to corroborate their hypothesis.